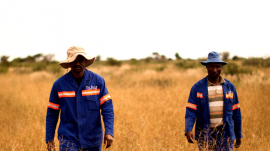 "Diamond mining company De Beers Consolidated Mines (DBCM) is spending more on exploration as it searches for a new diamond mine to augment its two existing South African diamond mines – Venetia, in Limpopo province, and Voorspoed, in the Free State," writes Martin Creamer for Creamer's Mining Weekly. The online magazine spoke to DBCM CEO Phillip Barton last week, who said that De Beers is increasing its exploration budget from $2.15 million to 2.9 million annually, with more funds available as necessary. “We’re still very positive around South Africa and our exploration activities continue, but it is looking like that needle in a haystack,“ Barton said. De Beers has already committed to invest $2.1 billion on the Venetia underground mining project, which De Beers says is now 18% complete after commencing in 2012 and is on track for first production in 2021.

The new underground mine will continue to be developed for another ten years before producing at nameplate capacity, writes Mining Weekly, and is expected to yield of 100-million carats. The Venetia openpit currently produces about 40% of South Africa’s yearly diamond output.