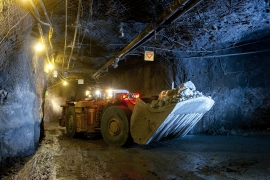 Petra Diamonds, the London-listed mining group focused on Southern Africa that operates four mines in South Africa and one in Tanzania, has reported that Q1 2017 (1 July to 21 October 2016, covering production and sales from 1 July 2016 to 30 September 2016) production is up 30% to 1,097,523 carats (Q1 FY 2016: 842,796 carats), due to increased contribution from undiluted run-of-mine (ROM) ore, improving ROM grades and additional tailings production from Kimberley Ekapa Mining. Petra achieved Q1 revenue of US$94.7 million from 745,447 carats sold, including the sale of a 138.57 carat white stone from Cullinan which sold for US$6.5 million, and a 10.64 carat pink stone from Williamson which sold for US$5.2 million. The company held no tenders in Q1 FY 2016; however, based on first half sales from two tenders in FY 2016, where the company earned $154 million from 1.3 million carats sold, it seems safe to infer that revenues and sales are trending upward.

Following the Period end, Petra closed its second tender of FY 2017 yielding ca. $66.4 million (ca. 574 kcts sold), with a third and final tender for H1 FY 2017 scheduled for early December 2016. Prices achieved during the second tender held firm with year-to-date rough diamond prices remaining flat on a like for like basis in comparison to H2 FY 2016. The company also announced that expansion programs, including the Cullinan plant project, remain on track and in line with expectations. The new caves being installed at Cullinan and Finsch are both starting to deliver undiluted ore and will result in a continued increasing ROM grade profile and improved product mix. Petra also reports that three unrelated incidents lead to four Petra employees being fatally injured during the Period.

Johan Dippenaar, Chief Executive Officer, commented: “Operationally, the Group has made a strong start to FY 2017 delivering close to 1.1 Mcts for Q1 and we continue to expect full year production of 4.4 to 4.6 Mcts, in line with earlier guidance. The newly established caves at both Finsch and Cullinan, accessing higher grade undiluted areas, are starting to meaningfully contribute to ROM production, which is continuing to ramp-up in line with expectations. The diamond market is holding firm with prices on a like for like basis matching those realised in the period January to June 2016 (our H2 FY 2016). Petra has always taken pride in excellent safety results posted by its operations. It is therefore with deep regret that we report fatal injuries suffered by four of our employees. Across the Group, we have embarked upon renewed safety drives to reiterate our zero-tolerance approach to unsafe acts and working conditions with an aim of zero harm to our workforce and contractors. Petra’s focus remains on the health and safety of our workforce, maintenance of a healthy balance sheet, the tight control of costs and the successful roll-out of our expansion plans, which will continue to deliver increased contributions from higher quality production areas.”