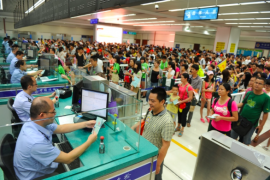 Diamond smuggling in China, an issue that has received significant press in recent years, is not going away. This year alone, customs officials have thwarted more than 100 attempts by Chinese diamond smugglers to sneak the precious stones into the country hidden in their underwear, socks, wallets and even packs of cigarettes, the South China Morning Post reports. Customs officials in Luohu, one of ten checkpoints at the border between Hong Kong and Shenzhen, said they had thwarted more than 100 different diamond smuggling attempts so far this year. In one case,133 diamonds weighing a total of 26.31 carats were hidden in pair of underpants, while in another, 14 diamonds weighing a total of 7.38 carats where found in a small front pocket of a man’s underwear. In yet another attempt, customs officials found 14 diamond certificates hidden under a girdle worn by a young man and then discovered 14 diamonds concealed in his wallet.

The report did not say where the suspects had obtained the diamonds.