Rio Tinto Diamond Production Up 3% in Q3, Buoyed By 22% Increase at Diavik Mine 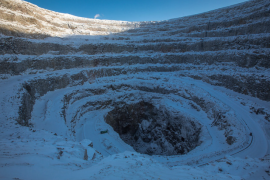 Rio Tinto has released its third quarter production results, reporting that diamond production increased 3.4 percent to 4.4 million carats in the three months ended September 30. The company’s share of production at the Diavik Mine in Canada jumped 22% to 927,000 carats (Rio Tinto holds 60 percent of Diavik, the remainder of which is held by Dominion Diamond Corporation). Meanwhile, production at the 100%-owned Argyle mine in Western Australia fell 0.6% to 3.5 million carats. Carats produced at Argyle in the first nine months of 2016 rose to 10.38 million carats, 3% higher than the 10.11 million carats recovered during the corresponding period in 2015 following continued ramp-up of the underground mine resulting in higher volumes processed, which was partially offset by lower grades.