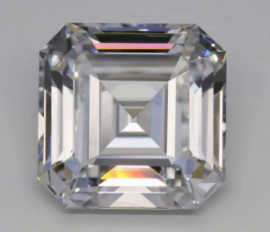 A week after the Gemological Institute of America (GIA) announced that its Hong Kong laboratory recently identified an undisclosed chemical vapor deposition (CVD) grown diamond weighing 5.19 carats - the largest ever CVD synthetic diamond ever detected - Tom Moses, the GIA’s executive VP and chief laboratory and research officer explains to Michell Graff of The National Jeweler how lab-grown diamond certificates issued by GIA differ from their natural counterparts. “When identifying clarity, the lab only uses VVS, VS, SI or I for synthetic diamonds.” The terminology for color and clarity for a white diamond, for example, is “J-equivalent color” and “VS2-equivalent clarity”.

GIA does not give specific color or clarity grades to synthetic diamonds; it rather names the equivalent to the natural D-E-F range ‘colorless’ and those in the G-H-I range are considered ‘near colorless’. Moses says that, “By their very nature, when they grow these diamonds, they are traditionally nitrogen poor.” Additionally, CVD-grown diamonds that are brown tinged are de-colorized through a treatment process to make them colorless or near colorless. Lab-grown diamond companies have asked GIA to alter their current certification system, however, according to Moses, “I just don’t see a reason why we would make that change.” Moses said despite what some people seem to think, the GIA is not using a different nomenclature to “punish diamond growers.” Rather, the lab just sees it as the most logical way to describe lab-grown diamonds.