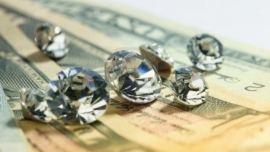 DiamondCorp has announced: "following accelerated financing discussions, the company has entered into a Shariah-compliant [no interest] secured convertible financing facility with Rasmala plc, a leading independent investment manager and shareholder in the company." DiamondCorp and Rasmala have agreed to the drawdown of two tranches for a total principal amount of £700,000 ($856,000). The first, in the amount of £400,000 ($489,000), is to be drawn down immediately. The second, worth £300,000 ($367,000), is anticipated to be drawn down in the near term. DiamondCorp will pay a markup on the commodities underpinning the facility (whose value is equal to the principal drawn down) at an equivalent rate of 15% per annum during the eight week term. It is secured against up to 5,000 carats of diamonds currently held in inventory and/or to be produced from operations. The proceeds of the facility will satisfy DiamondCorp's immediate term funding requirement and shall be utilised for working capital purposes that they urgently required in order to continue trading as a going concern in the immediate term.

As part of the new financing facility, Rasmala has been granted the right to appoint an individual to the Board of DiamondCorp, in addition to the continued role of Michael Toxvaerd as non-executive director of both DiamondCorp and Rasmala. The board changes pursuant to the terms of the facility are as follows: Euan Worthington, current chairman of DiamondCorp, has resigned from the Board, effective immediately, but shall remain as an employee of the Company for the immediate future; Chris Ellis, current non-executive director of DiamondCorp, shall shortly be formally appointed as independent interim non-executive chairman to oversee the formal sale process. DiamondCorp still requires an additional equity and/or debt financing of approximately £2.5 to £3.0 million ($3 to 3.7 million) in the near term to cover the anticipated cash required to fund operations through to commercial production. Paul Loudon, CEO, commented, "We are pleased to have secured this new financing facility, which will enable us to sustain our operations at the Lace diamond mine whilst we conduct our Formal Sale Process and evaluate all options available to us."