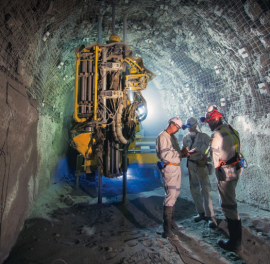 Petra Diamonds has released its annual report for FY 2016, with 16% higher rough diamond production at 3.7 million carats leading to only a 1% gain in total revenue at $430.9 million, and a 1% increase in adjusted net profit at $63.6 million. Chairman Adonis Pouroulis states, "While we achieved 16% higher production during the year, revenue was only up 1% as the higher volumes (albeit of lower value goods from the Kimberley tailings operations) were offset by rough diamond prices on a like-for-like basis, being down circa 6% in comparison to FY 2015 ... but it was encouraging to note that the market stabilised in Petra’s H2 FY 2016, during which we saw pricing recover circa 3%." He adds that,  "Fortunately retail demand for diamonds has remained stable and has continued to show positive growth in the major US market."

The statement clarifies that Petra commenced its mine development programs in FY 2009, with a plan to increase production to circa 3 Mcts by FY 2019. This target was subsequently lifted to around 5 Mcts further to the acquisition of Finsch in FY 2011, and then increased in FY 2016 to around 5.3 Mcts, further to the acquisition of the Kimberley Mines during the year. Over this period, Petra’s operational capital expenditure has increased from US$40.9 million in FY 2009 to reach a peak of US$297.6 million (excluding capitalised borrowing costs) in FY 2016. This substantial spend reflects the high level of activity related to the underground development finalising the new mining areas at Finsch, Cullinan and Koffiefontein, as well as the construction of the new plant at Cullinan.

Pouroulis adds, "In FY 2016, we continued to face some of the same challenges we experienced the prior year, namely the operational difficulties related to being reliant on old mining areas at our mines in South Africa and a weaker diamond market resulting in negative pressure on rough diamond prices. Petra still recorded strong results for the year, underpinned by record production of 3.7 Mcts. It was also encouraging to note that the expansion programmes designed to open up the new mining areas at our underground mines remained on track, and the anticipated increase in ROM grades and product mix at these operations has started to come through in our mine production numbers. This dynamic is expected to continue through FY 2017, and by FY 2018 the vast majority of our underground tons will be coming from the new mining areas." Petra is now forecast to reach approximately 5.3 Mcts by FY 2019,