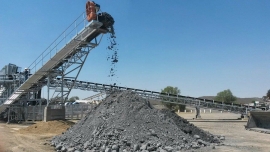 After a tumultuous week that started with the announcement that full production at its Lace diamond mine in South Africa would be delayed until February 2017 and that it needed to raise additional equity and/or debt of around $3m to 3.65m (£2.5m to £3.0m) in the near term to cover the anticipated cash required to fund operations through to commercial production, included a mine shutdown after a truck fire and concluded with the announcement that the third party with whom the Company has been in advanced discussions for the provision of a convertible debt facility has withdrawn from such discussions due to the adverse movement in the Company's share price, this week has started with two additional announcements: the resumption of operations at its Lace mine, and the commencement of a "strategic review" which would consider a merger or the outright sale of the embattled asset. “The board, therefore, intends to pursue any such possible alternatives to ensure the best outcome for its shareholders,” it noted in an update to shareholders.

Mining Weekly notes the following positive news concerning DiamondCorp's shares: "The company's shares rose by 37.5% and 66.8% on the JSE and LSE respectively on Tuesday (today, Oct. 18) following the news. The company’s share price had plunged by nearly 50% and 40% on the JSE and LSE respectively after the notification last week that there was another delay in the ramp-up to full commercial mine production. A day later, DiamondCorp’s shares fell for a second consecutive day, by as much as 11% on the JSE and 30.44% on the LSE, after the announcement of a Section 54 shutdown after a fire incident on a dump truck just inside the portal to the decline at the mine. DiamondCorp's press release assured its shareholders, “The financial impact of the four days of mining lost as a result of the shutdown instruction has been minimised by a rescheduling of programme maintenance and the fact that the mine was ahead of its planned tonnage for the month at the time of the shutdown.”