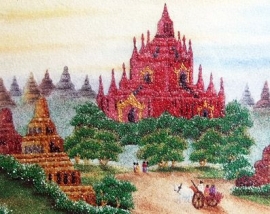 Thirteen years after the the United States government initially banned the import of all gemstones from Burma (Myanmar) to put pressure on the military junta that had ignored democratic elections, placed Nobel Peace Prize laureate Aung San Suu Kyi under house arrest, and persecuted minority groups throughout the country, U.S. sanctions on imports of the Burmese gemstones were officially lifted by an executive order on October 7. Although the first ban was implemented in 2003, a signficant loophole enabling gems that had been cut and polished outside Burma - usually in Thailand - to be legally imported as products of the processing country made the original ban ineffective, so it was not until 2008 when new legislation prohibited the import of ruby and jadeite mined or extracted from Burma, regardless of where the material was processed, that imports were truly halted.

The executive order from the Obama administration states that the "situtation" leading to the ban, "has been significantly altered by Burma's substantial advances to promote democracy, including historic elections in November 2015 that resulted in the former opposition party, the National League for Democracy, winning a majority of seats in the national parliament and the formation of a democratically elected, civilian-led government; the release of many political prisoners; and greater enjoyment of human rights and fundamental freedoms, including freedom of expression and freedom of association and peaceful assembly." The timing of the Obama's announcement, as JCK's Rob Bates points out, "was auspicious", as the 'Burma Ruby Task Force', led by American Gem Trade Association CEO Douglas K. Hucker and President Jeffrey Bilgore, Jewelers of America President and CEO David Bonaparte, and the Gemological Institute of America's Dr. James Shigley, among others, was present on the ground in Myanmar during this development.

Bates cites AGTA president Bilgore saying, "We have met everyone from the smallest artisanal miner to the members of parliament. And they are really excited to be part of the gem community. It’s a big relief and a long time coming.” He said that jewelers and their customers will benefit from greater access to choice gems, and that, “Customers are still asking for Burma rubies. After eight years of no longer being able to import, it will have an impact.” AJS Gems notes that, "The ban on the import of ruby and jadeite has always been controversial, and has been opposed by many people in the gem trade. The concern is that the sanctions did little to limit income to the Burmese junta, since China, their largest trading partner, was a regular customer at government auctions for ruby and jadeite. The sanctions mainly affected small miners and gem traders who sold their gems to Thai dealers." Meanwhile, Bates notes that the leaders of the U.S. delegation, "acknowledged that the Burmese jade sector remains problematic, and they were mostly focused on reestablishing ties with the gem business." Still, Bilgore said, "America is the largest gem-consuming market in the world and [the country hasn’t] been able to sell us rubies for eight years. They are happy to come out from the darkness, come out from the cloud.”