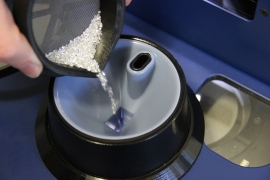 In his latest article, JCK news director Rob Bates looks at the impact of GIA reporting the discovery of the biggest ever undisclosed CVD synthetic diamond at its Hong Kong lab. Bates argues that even though most cases of undisclosed synthetic diamonds occur in India and China, this latest discovery demonstrates synthetics pose a real and present threat to the entire industry, including the retail segment. While large stones are as a rule certified in labs, the Achilles’ heel of the industry are the melee goods - the smaller diamonds of various sizes and qualities - which, Bates adds, are certified much less often, considering the cost for certification is generally too high in relation to the value of those diamonds.

Bates points to what is apparently an unwritten rule in the industry; allowing a 2-3% tolerance. He argues that this “standard” opens the door to increase that threshold even further. The industry itself, from a legal point of view, is obliged and owes it to itself to uphold a zero tolerance standard, Bates believes.

Suppliers of detection equipment and services are picking up the pace in developing new tools, including melee screening devices, but they largely remain too expensive for most traders and retailers. Exacerbating the situation is the fact that production of synthetic diamonds is developing at an equally fast if not faster pace, resulting in a cat and mouse game between those who try to push undisclosed synthetics into the natural diamonds market, and those who try to detect them.

Bates concludes that, until an affordable and portable screening device becomes available, the industry should be more cautious than ever in how and who they are dealing with.