More Rough News for DiamondCorp, Ordered To Shut Down After Truck Fire 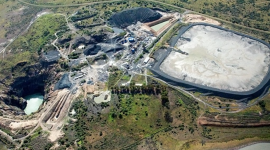 DiamondCorp's 74%-owned subsidiary, Lace Diamond Mines (Pty) Limited has been issued with a Section 54 shut down notice on underground operations by the South African Department of Mineral Resources ("DMR") relating to a fire incident on a dump truck which was extinguished without injury just inside the portal to the decline. The instructions issued by the DMR include a request for an "external ventilation audit team to inspect the mine for smoke and other gases". The press release reads that, "Mine management is struggling to find logic in the instruction and is considering its options including legal means of redress." The Company expects that underground mining operations will remain suspended for at least one week. The incident comes a day after announcing a delay in the commercial ramp-up to production, and has sent the diamond developer’s shares on the LSE (30%) and JSE (10%) plunging for a second day.

Yesterday, the group also warned shareholders that it will be unable to continue trading as a going concern if a convertible debt facility currently under discussion with a third party is not secured urgently. "Tthe company is looking to raise additional equity and/or debt from one or more parties of about $3m to 3.65m (£2.5m to £3.0m) in the near term to cover the anticipated cash required to fund operations through to commercial production and positive cashflow from operations," reads yesterday's statement. Miningweekly.com details the companies woes: "In July, a two-week DMR-ordered shutdown after a fall-of-ground accident in a development tunnel had set the full commercial production timeline back a month to August. In August, however, production from the first mining block on the 310 m level was interrupted by flooding after development drilling for the return air pass from the production level intersected a geological contact with significant water inflow.