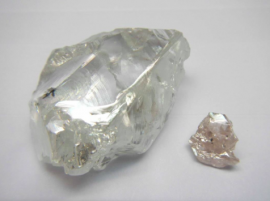 Continuing a year of impressive results, Lucapa Diamond Company has reported record diamond production in Q3 2016 from the Lulo Diamond Project in Angola. Sociedade Mineira Do Lulo (SML) produced 8,853 carats from its alluvial operations in the September quarter, a 154% increase over the same period in 2015. This puts YTD production at 14,521 carats, a 233% increase over the first nine months of 2015. Q3 production also included a record number of 'specials' (+10.8 carats), with 137 stones combining for 3,210 carats. The figure for Q3 alone is more than double the entire number of specials recovered in the first nine months of 2015.

The specials included type IIa white D-color diamonds weighing 173 carats and 104 carats, as well as a 39 carat pink diamond. The average size of stones recovered during the periods was also an exceptional 1.9 carats, also a record, as was the average diamond grade of 13.7 carats per 100 cubic meters.