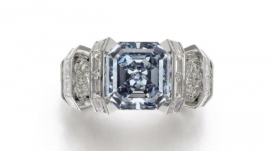 Sotheby's auction house says the Cartier ring holds an 8.01 carat blue stone named the Sky Blue Diamond and carries an estimated price of $15 million to $25 million. It will be displayed in London on Thursday through Monday before a sale in Geneva on November 16. David Bennett, chairman of Sotheby's jewellery division, said Tuesday that the diamond was a "wonderfully clear celestial blue, presented in an extremely elegant square emerald cut." He said it would "captivate all collectors of exceptional gemstones."

In May, the 14.62 carat "Oppenheimer Blue" diamond sold for more than 56.8 million Swiss francs ($57.6 million), including fees, crushing the previous record for the most expensive diamond ever sold at auction. Last April, however, a 9.54-carat rare blue diamond ring once belonging to the late Shirley Temple, one of Hollywood's most famous child actors, failed to sell at a New York auction on Tuesday, where it had been estimated to fetch between $25 million and $35 million.