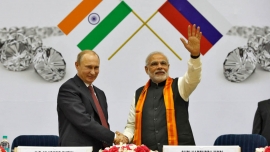 India and Russia will discuss ways to boost the direct trade of diamonds when Prime Minister Narendra Modi meets Russian President Vladimir Putin in Goa on Saturday, writes the Deccan Herald. Modi will discuss with Putin the measures New Delhi is considering to simplify the taxation and customs procedure to make it easier for Russian traders to export rough diamonds to India directly, avoiding the intermediaries, sources told DH. Reaching $13.26 billion and 130 million carats, India accounted for 37.77% of the global import of rough diamonds in 2015 and remains the largest diamond polishing hub of the world. However, 80% of India’s total import of rough diamonds from Russia comes through other countries. Still, the number of Indian resident companies signing long-term rough diamonds supply contracts with PJSC ALROSA of Russia increased from nine in 2014 to 12 in 2015.

This will certainly not be the first time that Putin and Modi discussed bringing Russian rough diamonds directly to India, and India in 2015 already set up a Special Notified Zone at the Bharat Diamond Bourse in Mumbai to facilitiate direct trade with diamond producers, but to this point it is only possible to view diamonds there rather than purchase them. Modi’s meeting with Putin might see them agreeing on further developing the notified zone, easing tax and customs procedure and upgrading its rough diamond auctions mechanism, sources added.