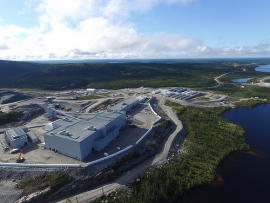 Stornoway Diamond has announced that its first sale of its Renard Mine diamonds will be held in Antwerp, Belgium starting on November 14th, 2016. This is two months earlier than previously anticipated, according to a press release. First ore was introduced to the Renard diamond plant on July 15, 2016. As of the quarter end, 91,010 tons of ore had been processed with attributable carat production of 111,556 carats, representing an average grade of 123 carats per hundred tons. More positive news for Stornoway is that 21 stones were recovered during the quarter larger than 10.8 carats in size (`specials`).

The press release reads: "Ore processing and diamond recovery during July and early August were irregular as plant equipment and material balancing issues were identified and addressed. The plant’s crushing and recovery circuits have performed well, but modifications have been required. These modifications are ongoing, and represent the principal limiting factor on the rate of ramp-up. Nevertheless, during the month of September ore processing was achieved on a continuous basis at an average run-rate of 1,792 tons per day, representing 30% of plant capacity. Peak processing run-rate achieved during September was 3,130 tons per day, or 52% of capacity.

Matt Manson, President and CEO, commented “We are pleased with the initial progress of the ramp-up at Renard and the production volumes we have achieved. This has allowed us to schedule our first diamond sale earlier than we had planned. We are working through the type of challenges normal in the commissioning of a new diamond processing plant, and remain on schedule for commercial production by year end."