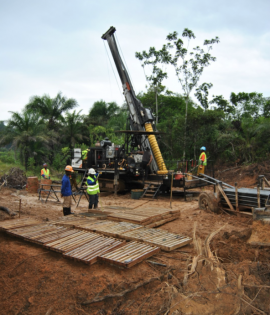 On August 22 2016, Stellar Diamonds announced that it had agreed with Octea Mining to combine their Sierra Leone projects to create the second largest diamond-mining operation in West Africa. Under the proposed deal, Stellar would amalgamate its Tongo kimberlite project with Octea’s adjacent Tonguma asset. The combined project would enable production of up to 250,000 carats per year of “high-value” diamonds, with mining grades of up to 290 carats per hundred tons of ore. At the time, Stellar CEO Karl Smithson said, “The high-grade and high-value nature of the kimberlites to be mined are compelling and the combination of operations should provide meaningful cost synergies that will enhance Stellar's projected operational margins." The mining of two separate resources as one, and centrally processing ore, is expected to net the company a number of cost savings, more efficient operations and significantly increased production rates.

Yesterday, Stellar announced the findings of the Preliminary Economic Assessment for the proposed Tongo-Tonguma Mine, saying, "The PEA demonstrates a financially robust and high margin 21 year life of mine over an initial resource of 4.5 million carats. The PEA also recognises considerable upside exists from additional high-grade kimberlite dykes on the properties which are not yet categorized into resource." Highlights from the study include projected life of mine project revenues of $1,518m with operating costs of $847 million, an estimated operating margin of 50% over the life of mine, with first production expected within 12 months, ramping up to over 200,000 carats annually in 4th year. The PEA further shows recoverable diamond grades and values for first three kimberlites to be mined of: Kundu: 260cpht (carats per 100 tons) and $209 per carat; Lando: 220cpht and $209 per carat; Tongo: 100cpht and $310 per carat. It also cites an exploration target of up to 8 million carats in addition to the existing resource.

Smithson commented: “The PEA of the combined Tongo-Tonguma mine demonstrates robust financial returns for a modest capital requirement and supports the Board’s decision to pursue this strategic acquisition. Three kimberlite dykes, Kundu, Lando and Tongo are contained within the mine plan and have compellingly high diamond grades and values and together support a long life of mine."