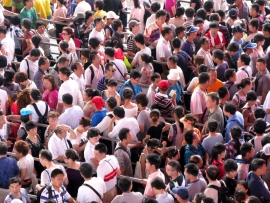 The Chinese National Day holiday period - also known as Golden Week - started October 1 and runs until October 7. It is the most important period after Chinese New Year in terms of the number of Chinese travelers, writes Jing Daily. This year, China’s Golden Week is set to break new records in tourism and retail spending, as over 750 million people go traveling, with over 4 million Chinese travelers venturing abroad." With China experiencing what is referred to as 'the democratization of international travel' (global travel was a luxury in China until just a few years ago; it has become more convenient with improving visa policies, better air connections, and competition, making it more affordable; the Chinese middle class is also growing by the millions, and the number of routes connecting China’s Tier 2 and Tier 3 cities with attractive international destinations are growing), Daniel Meesak of Jing Daily examines some major destinations and strategies:

And, hot off the press, Daniel Meesak has just reported that, "Initial reports from Golden Week in Hong Kong point to a stronger Chinese tourism performance than last year, but Chinese holidaymakers are spending less and staying shorter amounts of time than in previous years."