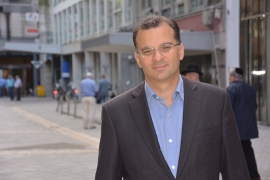 Grib Diamonds is a 100% owned subsidiary of LUKOIL and a relatively new player in the rough diamond business, having started its operations in Antwerp in May 2014. Grib Diamonds markets the production of the Grib Diamond Mine, which is owned and operated by oil and gas company LUKOIL. With estimated reserves of 91.5 million carats, it is the 8th largest diamond mine in the world, the 4th largest in Russia and the only major one in Russia that is not operated by ALROSA. Its active development phase started in 2008 and the first diamonds were recovered in 2014. The Diamond Loupe sat down with General Manager of Grib Diamonds, Alexey Genkin.

Tell us about Grib Diamonds and why you decided to set up shop in Antwerp:

Grib Diamond conducts all its activities according to three guiding principles: transparency, competitiveness and integrity, principles we believe the Antwerp trade as a whole values. But from a business standpoint, Antwerp is the world’s leading international rough diamond trading hub and the world’s number one knowledge center for diamonds, most certainly for rough diamonds. So that’s the short answer: our choice for Antwerp is due to the critical mass of companies.

For rough diamond sellers, this critical mass of customers is fundamental to running competitive auctions on a regular basis and to optimizing the diamond viewing processes preceding the auctions. Competition is very important to us, and Antwerp offers a competitive market. We want to sell diamonds to whoever is the most competitive. That can be big companies or small companies. It depends on their niche. We cannot determine what our customers need to remain competitive. We just want them to make money, by being better.

If our information is correct, Grib Diamonds has sold approximately 4.5 million carats worth $325 million. What are your expectations going forward?

Your information is pretty close, but not quite up to date (smiles). Grib Diamonds has sold more than 5 million carats so far, worth around 400 million USD. We have conducted 20 spot auctions (excluding auctions for Specials) and invoiced approximately 130 different customers. At peak production, in 2-3 years, we expect to sell around 4.5 million carats of rough diamonds per year.

Those are some impressive figures, particularly for a company that only started two years ago. And yet from a media perspective you do not receive much attention. Is this a concern?

No, it’s not a concern. We made ourselves known to our target audience when we started out, and the customers responded. People in the diamond industry are well aware of us, and that’s really what matters. We quickly built up a solid client base, and the vast majority are returning customers. It can take some time for customers to trust your product, to become familiar with it and to see how it develops – for instance with color over time. But we work hard to deliver a consistent, attractive assortment, and we are very satisfied with the number of customers we have. In this regard, we are concentrated on the quality of our B2B relationships.

What is a typical production assortment from the Grib Mine in terms of size and quality of stones? Are you recovering larger gem-quality diamonds?

Two times per year we conduct auctions for Specials (10.8+ carats stones) that are recovered at the Grib pipe. So far, the largest stone of gem quality we sold was 83.95 carats, the largest Type 2A white diamond - 61.98 carats.

Rough diamond prices are down approximately 8% on the year. De Beers has lowered their average price approximately 16% and ALROSA 3%. Where does Grib fall on this scale?

Our prices are almost flat this year. Smalls (-11) is the area under a bit more pressure due to continuing concerns of the market regarding undisclosed mixing of natural diamonds with lab-grown diamonds in these sizes, but we anticipate the market for smalls to start improving. They are in need of supply. Our prices for grainers and melees are actually a bit up in 2016. However, it is difficult to compare results of different miners as we do not know if we have the same starting points and calculation methodologies.

You sell by auction. If the market is soft, are you the first to feel it? Have the recent market fluctuations made Grib consider introducing a system of contracted customers?

We want to sell our rough diamonds at competitive market prices and the auction sales mechanism serves us very well in this respect. When the market is getting softer but has liquidity we are still prepared to sell and accept a certain degree of price volatility. If, on another hand, we feel that there is not enough depth in the market we will hold goods.

With any sales system, market softness is felt very quickly. Contracted customers need fewer goods or want them at lower prices. They start to refuse to purchase parts of the goods, defer them or sell them back depending on the options they are given. Nevertheless, generally less price volatility can be achieved with the system of contracted customers. We will consider diversifying our sales channels and offer term sales in addition to the auctions once our production reaches certain volumes. This should help stabilize our business during periods of increased market fluctuations and intensifying competition between miners in certain types of goods.

Grib Diamonds implements a ‘multi-split, multi-round’ auction system. Can you explain how this works and why you do it this way?

First, the clearing price is set by the highest losing bid. So the winners do not pay the price they actually bid, but the price of the customer who narrowly missed. Our system is designed according to the latest auction and game theory, based on the Nobel Prize-winning economist William Vickery’s auction theory on second price auctions. This gives the bidder the incentive to bid their true value on the goods – and not worry about the so-called ‘winner’s curse.’ The winner’s curse is when the winner, in a tender, pays significantly over the other bids due to incomplete information. As a result of not wanting to make mistakes, many bidders ‘shade’ their bids for fear of overpaying, thus not giving a true reflection of the market value.

Second, our customers have access to all the sorting results that make up the multiple-splits and we also indicate any quality difference between the splits from the same deal. So the auction participants bid for the theoretical average split. If they win, the system automatically randomly allocates to them one or several actual splits from the deal. The actual price the winners pay for the split(s) is adjusted for the quality difference from the theoretical average split. This is to help remove the uncertainty for our customers so, together with a physical inspection, they know exactly what they are bidding on.

Third, during the auction, participants can see the evolving demand for the different deals being offered. At the conclusion of the auction all bidders can see the clearing prices for the deals that were sold. Transparency is a key part of our auction system. This, combined with consistency of assortments, high level of service, convenient location and timing for viewings is what makes our auction sales system successful in my opinion.

Midstream financing has become one of the most significant industry issues in the past two years. Is this making it difficult for your clients? Do you see alternatives on the horizon?

Of course, when news comes out that another bank is leaving the sector, it is very negative for overall sentiment. But so far, we have not seen a significant impact on our key customers. They do not seem to have liquidity difficulties at the moment. My impression is that up until now, lost credit has been compensated by new banks entering the market and new lines being opened.

However, the longer-term impact of banks’ exit from the market could be more severe if outstanding lines that are gradually being closed are not replenished. Access to capital will be, in my opinion, one the biggest drivers of industry consolidation in the longer run.

The Diamond Producers Association just announced their new marketing campaign: “Real is Rare. Real is a Diamond.” Do you think this will be beneficial for the industry as a whole?

I think this is a very positive development. Ever since De Beers abandoned generic advertising there has been a vacuum in diamond promotion. Despite the fact that several players have tried to fill it with a variety of initiatives, e.g. De Beers with Forevermark, World Diamond Mark and CanadaMark, more effective marketing of diamonds is necessary to successfully compete with other luxury and discretionary categories for consumers’ attention. The new generation of consumers did not have exposure to De Beers’ campaigns. They have a different mentality and it is a challenge to market diamonds to them. I think DPA has a very strong board and management team that will find a way to attract Millenials to our market.

Alexey Genkin is the General Manager of Grib Diamonds NV, and has over 20 years’ experience in operations, private equity and capital markets. In 2013 Alexey joined LUKOIL Group to head Grib Diamonds NV in Antwerp. He is responsible for the diamond marketing operations. Between 2007 and 2012, he worked for Invest AG (Moscow), a private equity fund with some $1 billion of assets under management and served as its CEO since 2009. Over this period he also held several managerial and board positions with Invest AG portfolio companies including Chairman of the Board of Directors of ESI Holding, an infrastructure engineering company with more than $1 billion of revenues, and President of Russian Oils Group, one of Russia's largest vegetable oil producers.