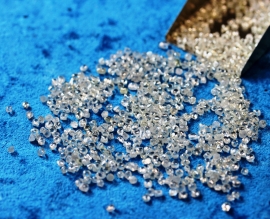 Diamcor Mining Inc., a publically traded junior diamond mining company that operates the Krone-Endora mine at Venetia in South Africa, reported $1,166,937.49 in sales during second fiscal quarter 2016. The company held two tenders during the period; combined, the rough diamonds tendered and sold during the current fiscal quarter  amounted to 8,274.47 carats, or an average price of USD $141.03 per carat. The company states that, "The price per carat realized during the tenders and sales completed during the period were consistent with company expectations for the goods being offered, and reflect the continued price weaknesses in certain categories of rough diamonds." The average price per carat is consistent with the price achieved in Q1, where Diamcor sold 13,384.72 carats for $1,905,978.44 at the three tenders completed in fiscal Q1. Sales in Q2 2016 increased 171% from Q2 2015, when only one tender was held. Then as well, average price per carat achieved was $140.