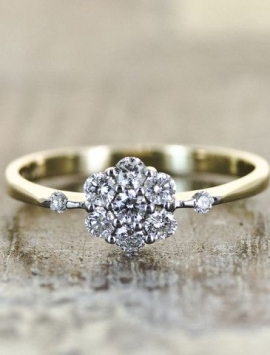 India’s Gem & Jewellery Export Promotion Council (GJEPC), together with De Beers, have launched a generic diamond promotion campaign specifically for the Indian market - previously announced at the 2016 India International Jewellery Show last August. "The campaign is targeted at the intra-family gift-giving market and is intended to get the Indian diamond industry’s static inventory of star- and melee-sized diamonds (between 0.01 and 0.06 carats) moving again. It is also intended to get inventories of jewellery that feature these diamonds, that have been lying unsold with retailers, moving again," writes GemKonnect. "Running from October through to the end of the year - the commercially important festival season that encompasses the Indian festivals of Dussera, Diwali and Dhanteras, as well as the marriage season that follows immediately after them and finishing off with Christmas. The campaign will have some spillover into the continuing marriage season through the better part of January next year," they add.

The multimedia campaign will target young families in particular, and will not promote specific brands, but rather a design: namely, floral designs featuring small diamonds in cluster settings, with entry-level designs starting at around $375. GemKonnect writes that Shailesh Sangani, Convenor of the GJEPC’s Promotion, Marketing and Business Development (PMBD) panel, explained that, “We want a husband to see the ad on television with his wife and then feel guilty when he looks at her.” He adds that, "We have taken an undertaking from the participating jewellers that they will only sell natural diamonds and that both diamond weights and gold karatage will be accurately listed on the products."

GJEPC Chairman Praveenshankar Pandya, who briefed the press on why the initiative was being undertaken, observed, “We are enthusiastic participants in the global generic diamond promotion initiative that is now being fronted by the Diamond Producers Association (DPA), but we have decided that while the DPA rolls out its global initiative market by market, starting this year with the US, we should do something proactive for our own market ... We can’t sit around and wait for the DPA 'Real is rare. Real is a diamond' campaign to finish with its launch market, the US and then get around to us.” Pandya explains that the GJEPC is working to promote Indian diamonds in a variety of markets, and would continue to work with the DPA: “The DPA campaign was initially intended to get to India only by 2018,” Pandya said. "Now, with our proactive push, the DPA has advanced the introduction of its global campaign to India to 2017. When they come here, we’ll collaborate with them. We’ll let them run this campaign if they want. We’ll be there to fund it and see that diamonds are promoted,” the GJEPC chairman said.