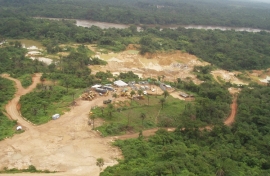 Sierra Leone exported 347,070 carats of diamonds in the first half of this year, according to the country's Diamond Dealers Club. Club President Federico Candiano told Rough & Polished that the country generated $188.9 million in revenue during the period. The figure includes $145,011,552 from mining licenses and $43,851,404 was from mining trader licenses. “The second half [of 2016] should mark a positive increase due to the seasonal washing in the rainy season,” said Candiano.

Sierra Leone exported 500,039 carats valued at $154 million last year, a 20 percent decline from the 2014 figure, he said. Last year’s output was hit hard by the Ebola outbreak which saw some operations shutting down as debts increased and investors pulled out. However, the situation was now improving. “Ebola is already something of the past and investors are timidly coming back,” he said.