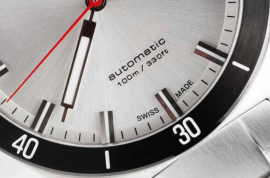 Futher findings included that, "weaker foreign demand has become the biggest risk," while "3D printing has gained a foothold" in the Swiss watch industry and online sales are growing. JCK's Rob Bates points out that, "Swiss watch exports have fallen for the last 13 months, and most executives expect the declines to continue. Still, 22 percent of watch execs cited the United States as a possible growth market, up from 13 percent in 2015. Some see the United States soon becoming the leading watch export market. For the first time since the survey debuted in 2012, counterfeiting ranked among the top five perceived risks. Online is making distribution of fake timepieces easier, the survey says." Further digging (by Bates) turns up the following: "The report notes that in the fourth quarter of 2015, more smartwatches were shipped than Swiss watches, though the latter still reigns in terms of value. But despite the growth of the smartwatch sales, it is still “unclear” if they present a threat to Switzerland ... smartwatches were ranked as the number four perceived risk."