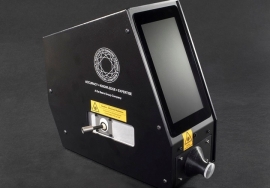 De Beers' International Institute of Diamond Grading & Research (IIDGR) will showcase its PhosView™ screening instrument in the UK for the first time at the UK Jewellery Conference at the East Midlands Conference Centre on October 3-4 2016. The PhosView™ was launched at the Hong Kong Gem & Jewellery Fair from September 14 to 18. Demand for the technology has been "particularly strong in the first two weeks it has been available to purchase," De Beers said in a statement.

The new instrument, PhosView™, is a compact, self-contained screening device designed to allow parcels of polished stones to be quickly and accurately analyzed to determine if they contain potential High Pressure High Temperature (HPHT) synthetics. During analysis, colorless and near-colorless stones in the 0.003 carat (one third of a point, or 0.9mm) to one carat size range are viewed on a screen while being subjected to UV light. Any phosphorescing stones are revealed and may be manually separated out for further analysis using built-in manipulator arms. The machine is designed to screen loose diamonds as well some jewelry pieces.

IIDGR President Jonathan Kendall said: “Since we launched PhosView™ two weeks ago, we have seen a very positive response from the trade. Confidence is of paramount importance in the jewelry sector, and the efficient, reliable and cost-effective solution that PhosView™ provides for HPHT synthetic screening has proved to be very popular."