Lucapa Finds Yet Another Large Diamond – This Time 172 Carats 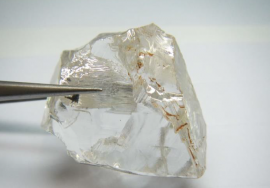 Just a week after finding a 104-carat Type IIa, D-color diamond which was the fourth stone over 100 carats discovered this year, Lucapa Diamond Co. Ltd., an ASX-listed Australian company based in Perth, has uncovered an even bigger exceptional diamond from its Lulo Project in Angola. Lucapa said it unearthed 172.67-carat Type IIa, D-color stone. It is the fifth 100+ carat diamond found at the mine this year, and the sixth this year. In February, Lucapa uncovered a 404-carat rock at the same mine, which sold for $22.5 million, and is the biggest diamond ever found in Angola.