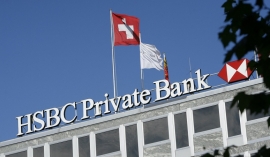 Four Israeli diamond dealers have appeared in court in Tel Aviv accused of holding close to 100 million shekels ($21 million) at HSBC Switzerland that was not reported to the Israel Tax Authority authorities. The unnamed diamond dealers allegedly held undeclared accounts at the bank, the tax authority said on Thursday, Reuters reported. A Tel Aviv court later agreed to release them after posting bail. All four have denied the allegations.

Israel's tax authority had been working since February 2015 to obtain a list of Israelis with accounts at HSBC Switzerland. In August, it said that French authorities handed over a list of more than 8,000 Israeli customers, the report added. Having a Swiss bank account is not illegal in Israel as long as it is reported to authorities and taxes are paid. HSBC last year acknowledged "past compliance and control failures" that may have allowed some customers to evade taxes.