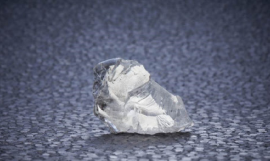 Dominion Diamond Corporation reports the restart of the Ekati process plant and the sale of an exceptional diamond recovered at the Ekati diamond mine earlier this year. The Ekati process plant resumed operations at full capacity on September 21. Plant operations had been suspended since a fire that occurred at the Ekati process plant on June 23. During this time, the company worked to lessen the impact of the fire on production and cash flow for the current fiscal year. This involved reducing operating and capital costs by deferring mining activities at the Lynx and Pigeon open pits, while continuing to mine and stockpile higher value ore from the Misery Main open pit and Koala underground. The ore blend for the remainder of the current fiscal year is expected to be a blend of the higher value Misery Main and Koala ore of which approximately 750,000 tonnes was available in stock-pile when the plant resumed operations. The total cost of the process plant repairs is approximately US$15 million.

Meanwhile, a 186-carat diamond was sold for $2.8 million at the company's most recent sale in September. It recovered the stone in early June during the processing of feed from the Pigeon kimberlite. The stone is the largest gem quality diamond ever recovered at the Ekati mine.