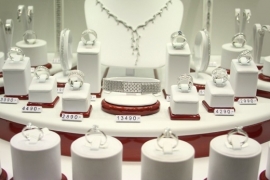 Following downward-trending second quarter reports from major U.S. jewelers such as Signet, Zales (part of Signet) and Tiffany & Co, sales at specialty jewelry stores also fell in July, reports Rapaport News. "Sales fell 2.2 percent to $2.1 billion across outlets selling only jewelry and watch products during the month, according to the U.S. Census Bureau. The data does not include sales at department store chains and other multi-product outlets." In its "Second Quarter Financial Results 2017" statement issued August 25, Signet reported that same store sales were down 2.3% compared to an increase of 4.2% in the second quarter Fiscal 2016, and total sales of $1.4 billion were down 2.6%. At the time, Mark Light, CEO of Signet Jewelers said, “We are disappointed by our Q2 results and market conditions have been challenging particularly in the energy-dependent regions. This has contributed to a downward revision in our annual guidance."

Meanwhile, Sterling Jewelers' - which Rapaport clarifies is the country’s largest specialty jeweler which includes Kay and Jared - same store sales decreased 3.1%. Average transaction value decreased 0.8% due to relatively stronger sales of several fashion and diamond jewelry collections as compared to higher-priced bridal jewelry. Zale U.S. Jewelry  saw same-store sales decline 2.2 percent. Tiffany & Co reported a 9 percent drop in its comparable store sales in the Americas region during the quarter. In August, Signet's CEO also pointed to the Brexit and the U.S. presidential campaign affecting the mindset of people in America this year - and he was not the first to make the jewelry-election connection. Whether these factors are directly impacting the specialty jewelry market as a whole is a matter of speculation right now.