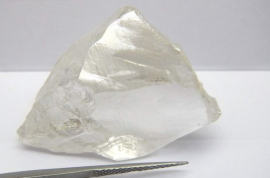 Lucapa Diamond Co. Ltd., an ASX-listed Australian company based in Perth, has uncovered yet another exceptional diamond from its Lulo Project in Angola and believes it is closing in on the original source of the gem. The 104-carat Type IIa, D-color diamond is the fourth stone over 100 carats Lucapa has found this year and the fifth overall. In February, it uncovered a 404-carat rock at the same mine, which sold for $22.5 million, and is still the biggest diamond ever found in Angola. The company's share price jumped 32% on the back of that earlier announcement.

According to ABC News (Australia), Lucapa CEO Stephen Wetherall believes the company was on the cusp of discovering the original source of the stones, which could make it a takeover target for some of the largest diamond miners in the world. He said the number and condition of the diamonds collected in the area over the past 12 months . He explained that the number, size, shape, and roughness of the large stones found recently suggested they had not travelled far from their original seam, which also suggests the company was close to the major deposit. "It just seems that every corner we turn we seem to trip over a large recovery," Mr Wetherall said. "We are quite excited because when you recover these large diamonds, they generally don't travel very far and if we're going to be recovering these in the source, most certainly we will have one of the most special diamond mines in the world. It certainly improves the economics and viability of the source that we are searching for." He would not speculate on how much the latest 104-carat find would fetch at auction, but said it was worth many millions of dollars.