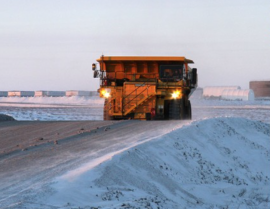 "Just over two decades in the making, Canada's newest diamond mine is set to officially open Tuesday (September 20) in the N.W.T. at a ceremony involving Indigenous leaders, mining and territorial officials," writes Kate Kyle for CBC News. The mine came online and starting producing diamonds last month, with its first commercial production set for the first quarter of 2017, and is estimated to be one of the 10 biggest diamond mines in the world, project to deliver 4.5 million carats annually over a 12-year life span. De Beers Canada owns 51% of the mine, while Mountain Province Diamonds owns 49%. Bill Enge, head of the North Slave Metis Alliance, one of six Indigenous groups who have signed confidential impact and benefits agreements related to Gahcho Kué, told CBC that the mine should, "help our people move out of that last rung on society's ladder. It's a very significant development in the Northwest Territories."

As reported earlier, De Beers projects that the mine, "Will provide a $5.2 billion (C$6.7 billion) boost to the Canadian economy" according to the "De Beers in Canada Socio-Economic Impact Report". The development of Gahcho Kué between 2006 and 2015 has already provided a $341 million (C$440 million) boost to the NWT economy, but nearly 90% of Gahcho Kué’s economic impact will be delivered once the mine becomes fully operational. Including its downstream supply chain impacts, the mine supported more than 2,700 jobs in 2015, with employment at the site representing more than 10 percent of employment in the NWT’s extractive industries. This includes supporting 11 communities across Canada, including $43 million (C$55 million) in support to First Nations through Impact Benefit Agreements. Tom Hoefer, executive director of the N.W.T. and Nunavut Chamber of Mines, says the new mine is good news for the territory. "I think it's significant, since we lost two mines [in the N.W.T.] last year," he said, referring to De Beers' Snap Lake diamond mine and North American Tungsten's Cantung mine, on the N.W.T./Yukon border, writes Kyle.

In De Beers' official announcement, Bruce Cleaver, CEO, De Beers Group, said: “As millions of new consumers enter the middle classes in the coming years, consumer demand for diamond jewellery is set to see continued medium to long term growth. I’m therefore delighted with the official opening of Gahcho Kué, our largest ever mine outside of southern Africa, as it will help to meet this increasing demand. Allied to our major investments in production capacity expansion in the southern African region, the opening of Gahcho Kué positions De Beers and its partners strongly to capitalise on the industry’s positive demand outlook.”