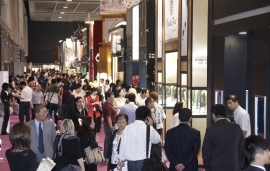 With diamond traders heading home as the Hong Kong Jewellery & Gem Fair came to an end on Monday, most appeared to be relatively optimistic though cautious ahead of the approaching holiday sales season. Demand for diamonds in the Far East remains soft due to the economic slowdown in China and an ongoing drop in tourists arriving in Hong Kong, Rapaport News reports.

Dealers in loose diamonds were "relatively positive as the show represented an opportunity to sell after a long period of inactivity and a sluggish summer". With retailers and dealers having lower inventory levels, buyers were looking to refill their stocks to some extent, exhibitors told Rapaport. Furthermore, this year's show better than the 2015 event which took place during a slump in demand worldwide, according to Laurence Ma, president of the Diamond Federation of Hong Kong, China.

Diamond sales were highly specific, according to the report, and mostly in the 0.20 carats to 2 carats size range. Melee goods were weak because of reduced demand and increased concern about undisclosed synthetics entering the supply chain.

There was reportedly a rise in concern among consumers and retailers about lab-grown diamonds being mistaken for natural stones and there was an emphasis on the importance of differentiation and transparency. Show organizers, UBM, organized a program that allowed exhibitors to display a certificate verifying that diamonds in their booths are natural. UBM did not vet exhibitors to ensure this, said Wolfram Diener, senior vice president of UBM. Exhibitors obtained the certificate if they were members of a trade body such as the Antwerp World Diamond Centre, the Israel Diamond Institute and the Diamond Federation of Hong Kong, China.