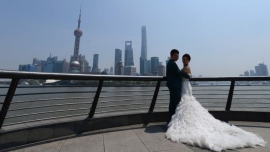 One of the key assumptions in De Beers' "Diamond Insight Report 2016" is that the surge of diamond demand in China - the second largest diamond market in the world - will continue, but at a slower pace than in recent years. This is understandable, as diamond demand in Mainland China doubled its share from 7% in 2008 to 14% in 2015. De Beers finds that, "Positive consumer demand growth is likely to continue to come from Asian consumers, particularly Chinese and Indian, driven by increasing household wealth over the next 10 years but at lower levels than previously assumed." As for the reasons behind the slowdown, De Beers writes that demand in China is down: "Due to increasing international travel", or; "the widely reported Chinese economic slowdown was the main contributor to the slower growth in diamond jewellery sales"; alternatively, the report points to "unfavourable currency movements"; they quote Bank of America Merrill Lynch saying it is "due to campaign against corruption and conspicuous consumption", and Morgen Stanley saying it is, "due to the economic slowdown and recent volatility in the stock market."

All of these factors are likely valid reasons for slowing diamond demand in China; however, there may be another, even more fundamental and ensconced reason than the analysts think: the decline in marriage. In their article in The New York Times last Monday - "Marriage Falls in China, Transforming Finances and Families" - Amie Tsang and Zhang Tiantian point out that the demographical changes that have already influenced American and European culture are now catching up to China: "Fewer Chinese people are getting married, a shift with profound implications for China’s economic and social life. The decline in marriages means a decline in the number of babies, and potentially less spending on homes, appliances and other family-related purchases - the kind of spending China needs to drive economic growth." And they add diamond jewelry to this list: "Already some businesses are thinking single. Jewelry makers are offering cheaper baubles for unmarried sweethearts. One appliance maker is selling smaller rice cookers."

"The marriage slump," the authors write, "has been caused in large part by China’s aging population and the legacy of its harsh one-child policy ... Ended formally in January after 35 years, the policy accelerated a decline in the country’s birthrate. As a consequence, people between 20 and 29 - prime marrying age - make up a declining share of the population compared with two decades ago. And because families often preferred male babies, China has a surplus of men, further complicating marriage prospects." Still, there is potentially a silver lining, as the decline in marriage rates also stems from the rise of an educated population of women. "Specialists in economics, demography and sociology say some of those women are delaying marriage to build careers and establish financial footing, resulting in a more empowered female population that no longer views marriage as the only route to security." And if another trend De Beers points out regarding U.S. Millennials carries over to China - namely, self-purchases by educated, well-paid and liberated single women - then a new market could emerge out from under the traditional marriage market.

The question, however, is to what extent this mentality will be adopted. "On the economic front," write Tsang and Tiantian, "the impact could be double-edged. Single people generally buy fewer houses, have fewer children and buy fewer toys and gadgets than married couples. That could complicate China’s efforts to turn its traditionally tightfisted population into American-style spenders, to offset its economy’s dependence on exports and big-ticket government projects. It could also lead Chinese consumers to put more money away in the bank or under mattresses." On the other hand, "Chinese consumers could simply spend money on something else." Nonetheless, the trend toward lower price point and delayed diamond spend could take a good while to play out, and Chinese retailers know it. "Businesses are preparing for the shift. The jewelry industry expects sales growth to slow in China as marriage declines. In response, many stores are offering a greater variety of jewelry, such as cheaper gems to entice dating couples who have less money."