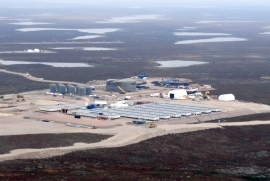 Diamond industry analyst Paul Zimnisky writes that there few remaining diamond development projects in the pipeline big enough to have an important impact on global production following the development of the Gahcho Kué in Canada and Rio Tinto's withdrawal from the Bunder project in India. Gahcho Kué (51% De Beers/49% Mountain Province Diamonds), the world’s largest new diamond mine, is due to start commercial production in Q1 of next year with annual output of 4.5 million carats and a 12-year lifespan. "If production forecasts are reached, the mine should be one of the 10 largest diamond mines in the world by volume and value produced on an annual basis over most of the life of mine," he writes.

Apart from De Beers, Rio Tinto was the only major diversified miner with a significant stake in a large-scale diamond development project. Rio’s Bunder project in India had the potential to produce 27 million carats over an estimated mine life of 30+ years, and Rio spent almost $100 million on development over the last 14 years. Rio said its recent decision to pull out was due to a company-wide cash conservation strategy, but the slowness of Indian mining approval and environmental hold-ups are likely to have also played a part.

As far as future new sources of diamond production are concerned, Zimnisky says Angola has potentially the biggest new project in the world, with its new Luachi project which could contain as much as 350 million carats with an annual production of 12 million carats. Initial production at Luachi could start as soon as 2018 according to Endiama, which could coincidently coincide with the conclusion of mining at Argyle, the largest diamond-producing mine in the world in volume terms, which is nearing the end of its mine life. Endiama has said it plans to spend $300 million on capital expenditure on phase 1 of the Luachi project, with the potential to spend as much as $800 million over six years, although very few official details on the project have been formally released, he adds.

Outside of Angola, Canada and Russia are home to the only remaining new diamond projects with the potential to produce one million-plus carats annually. These include the Renard mine operated by Canadian-listed Stornoway Diamonds, Shoregold’s Star-Orion project in Saskatchewan, and Peregrine Diamonds' Chidliak project in Nunavut. In Russia, ALROSA has two projects of note in development: the Verkhne-Munskoye deposit and the Zarya project, he concludes.