Lucapa: Alluvial Mining Operations at Lulo Mine Ahead of Plan 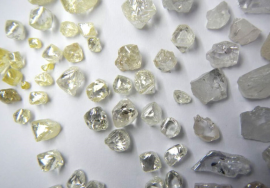 Lucapa Diamond Company and its partners, Angolan state-owned diamond miner Endiama and Rosas & Petalas, say that alluvial mining operations at the Lulo mine in Angola are proceeding ahead of plan. Lucapa said the recent investment in earth-moving vehicles and equipment saw Lulo achieve record monthly processing volumes in August. Diamond production for August was 2,882 carats, the second-best month on record. The August production included 39 special diamonds – stones weighing 10.8 carats and more – up to 80.5 carats in weight.

"This takes to 98 the number of specials recovered from Lulo in the first two months of the September 2016 quarter as the Lulo partners continue to mine high-value areas such as Mining Block 8. The August production also included more fancy colored diamonds, including pink and yellow gems," the miner said. "The average monthly diamond grade for August was 12.6 carats per 100 cubic meters, while the average size of the diamonds recovered in august was 1.7 carats.