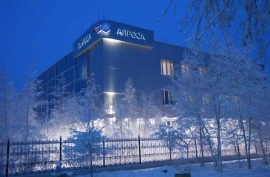 (izvestia.ru) Translation by Rough-Polished: According the Izvestia Daily, Vice President of ALROSA Rinat Gizatulin said that the Russian diamond miner is exploring the possibility of establishing its own operation to produce synthetic diamonds. However, analysts doubt ALROSA will be interested in starting its own production as an independent business: rough diamond production is highly profitable for ALROSA, and it makes no sense for the company to ‘waste its time’ on producing lab-made diamonds on an industrial scale. Nonetheless, according to the ALROSA VP, within the next year the company plans to formulate its next steps on the synthetic market and will propose options for the approval of its shareholders. "Before we start producing synthetic stones, we need to understand the prospects of this business and explain the need to work in this direction to shareholders," Gizatulin said.

The company has thus far not decided whether it will develop the new line of business on its own or in a joint venture with one of the existing Russian producers. Currently, there are at least three producers of synthetic stones in Russia based in St. Petersburg, Moscow and Novosibirsk. ALROSA has already created a think tank that monitors and analyzes the situation in this market. The company monitors the state of affairs in the market for synthetic stones to be able to respond to possible threats to the diamond industry that may arise along with the development of technology. "The main thing for us is to draw clear distinction between diamonds and synthetics. Our diamonds were created by nature millions of years ago, and each of them is unique. At the same time, we have been observing the developments related to synthetics for only 10 years, and we do not know what will happen with these stones in the future," Gizatulin said.