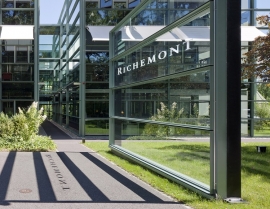 Richemont, which owns the Cartier jewelry and watches maison among other units in the luxury sector, issued a profit warning on Wednesday after recording a drop in sales. The results reflected the challenges luxury goods companies face from weaker demand in Asia and a decline in tourism in Europe, the Wall Street Journal reported. Geneva-based Richemont said sales fell 14% for the five months through August from the previous year at actual exchange rates. At constant exchange rates, sales declined 13%. It also said it expects operating profit for the six months through September to fall around 45% from the previous year. The firm has been hit by the effects of the strength of the Swiss franc. Most of the cost of production is in francs, and overseas revenues suffer when they are converted back into the Swiss currency.

“We are of the view that the current negative environment as a whole is unlikely to reverse in the short term,” the company said. And Richemont Chairman Johann Rupert said, “We remain convinced of the long term prospects for luxury goods globally.” He also noted that the world economy faces a problem of oversupply that isn’t restricted to luxury goods but also affects industries such as automobiles. Richemont said it is well positioned,” citing a strong balance sheet and its well-known brands.

Luxury goods firms have been hit by a series of shocks in recent times, including weaker global growth that has reduced disposable income, corruption crackdowns in China, and terrorism fears in well-known shopping hubs such as Paris. Meanwhile, in Asia, sales growth in mainland China and Korea “was more than offset by the continuing weakness of the Hong Kong and Macau markets,” Richemont said. Sales in Japan declined sharply, in part due to the strong yen while sales also fell in the Americas, albeit at a slower rate than in other regions. Sales grew in the U.K. after the referendum to leave the European Union, which weakened the pound.