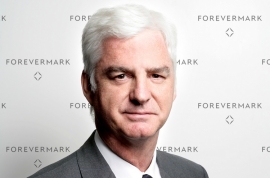 Stephen Lussier, the CEO of De Beers brand Forevermark, said steps taken in the second half of 2015 after production was reduced had proved their effectiveness with a stronger performance for De Beers in 2016. "We are pretty optimistic," he told Bloomberg TV. "Demand is holding up but I would call it steady rather than booming in terms of consumer sales. This makes us cautious and careful about the second half of 2016 but the polished market has really been stable."

Looking to the future, he said supply is likely to decline in the coming decade. "We think China and India will be strong long-term markets for us. It looks like prices can only head one way due to the supply level." Meanwhile, Mainland China "is doing well and this year Chinese consumers who were buying in Europe and are now buying in Mainland China."

On the issue of millennials, he said that De Beers research to be released on Thursday would show that they are keener on diamonds than widely believed. "They represent half of all diamond sales and they are far from reaching their peak earnings period," he said, adding that self-purchase of diamond jewelry is also growing." Touching on the issue of synthetic diamonds, he dismissed them saying "they are not rare, they are not precious and have no enduring re-sale value. I am not sure that the Chinese are going be that interested [in them]."