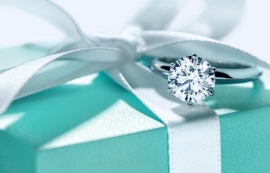 Upscale jeweler Tiffany & Co. has appointed Mark Erceg to become its next executive vice president and chief financial officer, responsible for the company's worldwide financial, indirect procurement and information technology functions.  His appointment will become effective on October 18. He replaces Tiffany's former chief financial officer who left in May. Erceg comes to Tiffany's from outside the jewelry industry, having been the CFO and executive vice president at Canadian Pacific Railway since May 2015.

This strikes a curious parallel with another railway man who recently ascended to the top of a leading diamond and jewelry industry company, namely, Phillipe Mellier, who switched tracks from his position as President of Alstom Transport - which develops and markets systems, equipment and services for the railway sector - to become CEO of De Beers, a job he left earlier this year. Tiffany's CEO Frederic Cumenal said Erceg's skills and experience were important "as we continue to work toward strengthening Tiffany's luxury brand position around the world and enhancing our profitability and productivity." Erceg, 47, will be based in New York.

Tiffany's stock price is down 10% so far this year, with the company seeing sales at existing stores decline 8% in the second quarter – which was slightly worse than analysts had expected – though less steep than in the first quarter.