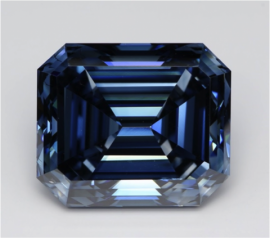 New Diamond Technology (NDT) has produced a blue diamond that it says is the world’s largest lab-grown blue diamond – and more than twice the size of its previous large blue stone, reports Rob Bates in JCK Online. The SI, Asscher cut stone weighs 10.07 carats and has a fancy deep blue color. NDT's largest blue diamond had been a 5.03-carat stone.

NDT President Tamazi Khikhinashvili said the 5.03-carat diamond sold to a retailer for $250,000 who sold it to a buyer for an undisclosed amount. Khikhinashvili said that if the diamond were natural, it would likely fetch millions, according to the report. “People buy natural blues for investment and never wear them. This is something someone can wear,” Khikhinashvili was cited as saying.

NDT has also produced what it calls “the world’s largest lab-grown colorless round”—a 6.07-carat, H color, VVS1 diamond, and has also produced a 10.2-carat emerald cut colorless stone. The stones are being exhibited by NDT at the Hong Kong Jewellery & Gem Fair, which opened today (September 13).