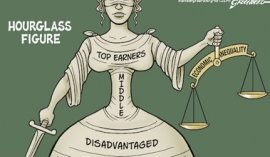 "We have come a long way from Henry Ford famously paying his workers a living wage so they could afford to buy his cars. Today, there is a huge disconnect between those at the top and the people they employ. Then those same executives go on earnings calls and scratch their heads about where all the shoppers went." So concludes JCK's Rob Bates his pointed analysis of the sluggish state of jewelry retail and the failure of high-level executives to understand why the middle-class are not spending; or perhaps more accurately, that the middle class is disappearing. "The shrinking of the middle class," he writes, "has long been said to be hurting retailers such as Macy’s. Until recently, it seemed that Signet was immune." This is no longer the case, and Bates sees public jewelry companies such as Tiffany's, Blue Nile and Birks as occupying the same boat. Pandora is bucking this trend, but of course their price points are lower.

Referring to Macy's chief financial officer Karen Hoguet in May claiming executives to be at a loss and, “frankly, scratching their heads” why middle-market consumers weren’t shopping at its stores, Bates suggests that Hoguet - who, he points out, made $2.3 million last year while CEO Terry Lundgren made $11 million - fails to appreciate the impact of 'the hourglass economy': the introduction of more lower-priced products on one end, while luxury retailers bolster high-end products on the other in order to take advantage of the unequal distribution of wealth that is nowhere more pronounced than in the U.S. This negatively impacts mid-level retailers, such as Macy's. Bates reminds us that Macy's has closed 141 stores this year, and then writes: "Glassdoor.com estimates that the average Macy’s sales manager makes about $48,000 a year. Pew Research Center says the national middle-class threshold is $42,000. So the people who work at Macy’s are the kind of people who would ordinarily shop at Macy’s. Yet, those closures will likely affect thousands of workers. Amid that backdrop, it’s not surprising that middle-class consumers are anxious and skittish and not hitting the malls to buy jewelry or really much of anything." A good point.