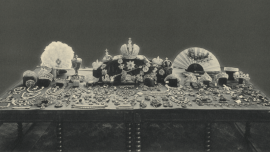 The GIA reports that one of the few surviving copies of a Bolshevik-era catalog of royal jewels seized during the Russian Revolution is available to the public for the first time as part of an extensive digitization project by GIA’s Richard T. Liddicoat Gemological Library and Information Center. This catalog, along with more than 200 other rare and historically significant books on gems and jewelry, is accessible on archive.org.

“Following the emperor’s overthrow in 1917, noted mineralogist A.E. Fersman, with help from experts and jewelers including Agathon Fabergé, was tasked with photographing and cataloging Russia’s regalia and crown jewels,” said Dona Dirlam, director of GIA’s library. “In 1925-26, the Bolshevik government published Russia’s Treasure of Diamonds and Precious Stones with the intention that the 406 Romanov jewels featured would never be sold. Eventually several of the pieces went to auction; approximately 20 copies of the Fersman catalog are known to exist today.”

The jewels featured in the Fersman catalog were collected by the Romanov dynasty, beginning with the reign of Peter the Great in 1689 until the overthrow of Emperor Nicolas II in 1917. Among the 406 treasures are the Imperial Sceptre set with the 189 carat Orlov diamond, the Imperial Globe set with a 200 carat sapphire, the Great Imperial Crown, the Imperial Nuptial Crown, chains, stars, crosses, emblems, diadems, necklaces, brooches, rings, earrings, as well as loose diamonds, emeralds, sapphires, rubies, spinels, pearls and alexandrites.

Attendees of the 2016 annual meeting of the Geological Society of America (GSA) in Denver will have the opportunity to learn more about this exceptional catalog during a special poster presentation by GIA’s librarians on Sept. 27 at the Colorado Convention Center.