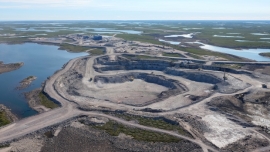 According to a De Beers' press release, Gahcho Kué, the world’s largest new diamond mine under construction, "Will provide a $5.2 billion (C$6.7 billion) boost to the Canadian economy" according to the 'De Beers in Canada Socio-Economic Impact Report'. The report details the important economic contribution De Beers activities have made over the last half century and continue to make today. "The new mine, located in the Northwest Territories (NWT), is a joint venture between De Beers Canada (51%) and Mountain Province Diamonds (49%). Set to open officially later this month, it is expected to produce approximately 54 million carats of rough diamonds over its lifetime, reinforcing Canada’s position as the world’s third largest diamond producer by value." The statement reads that the development of Gahcho Kué between 2006 and 2015 has already provided a $341 million (C$440 million) boost to the NWT economy, but nearly 90% of Gahcho Kué’s economic impact will be delivered once the mine becomes fully operational.

Including its downstream supply chain impacts, the mine supported more than 2,700 jobs in 2015, with employment at the site representing more than 10 percent of employment in the NWT’s extractive industries. This includes supporting 11 communities across Canada, including $43 million (C$55 million) in support to First Nations through Impact Benefit Agreements. Kim Truter, Chief Executive, De Beers Canada, said: “Diamonds are perhaps one of Canada’s best kept secrets, yet, as this report shows, they contribute significantly to the economy. In the 50 years we have been in Canada, we have seen how our business can be a catalyst for delivering both economic and social value, locally, regionally and across the country. Gahcho Kué is an important project for us, but also for the Northwest Territories and local communities it supports. It will contribute economically through a significant annual spend that places a priority on partnering with communities, local procurement, local hiring and local social investment.”