Dominion Diamonds Rehiring Workers Laid Off After Fire at Ekati 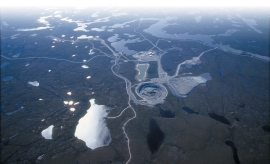 Dominion Diamonds says it will be rehiring the employees it laid off in June. The Canadian mining company temporarily laid off about 300 workers from its Ekati diamond mine in the North West Territories after a fire at a processing plant on June 23. At the time, the company said it needed to save money while it closed down operations to repair the plant, CBC News reported.