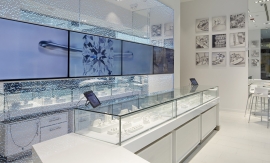 Online jeweler Blue Nile has opened its fourth Webroom, and plans to open a fifth by Thanksgiving at a yet-unnamed location. Webrooms are display locations that provide a retail setting for consumers to see more than 400 goods available for sale which can then be ordered on a PC, by smartphone or via a tablet. Sales can also be made online via in-store tablets and with the help of non-commissioned consultants. The fourth Webroom is in the Washington Square mall in Portland, Oregon, and the first to open on the West Coast, just a few hours south of Blue Nile headquarters in Seattle. The company operates Webrooms at Roosevelt Field mall in Long Island, New York, White Plains, New York, The Westchester mall, and at Tysons Corner Center mall in Fairfax County, Virginia.

“We’re bringing the on and offline worlds together to meet consumers’ demand for choice and shopping on their terms,” said Blue Nile President, Chairman, and Chief Executive Officer Harvey Kanter. “The Webroom experience is retail reimagined and unlike traditional jewelry stores. We’re finding that a segment of shoppers want access to Blue Nile’s easy, educational, and pressure-free advice in a physical setting where they can see, touch, and feel the product but still take advantage of online prices.”