The Future Is Certain in Antwerp 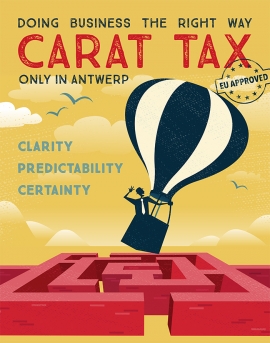 After years of discussion between the Antwerp diamond industry and the Belgian Government, in 2015 it was decided to introduce the “Diamond Regime” tax system, pending European Commission approval. Today the EC announced that the fiscal regime does not constitute State aid, and gave the green light to what has come to be known as the "Carat Tax". Implementation of this new tax regime will put an end to complex discussions between the Antwerp diamond industry and tax authorities on the control and valuation of diamond traders' stock. The EC says that, "The new regime will ensure that diamond wholesalers will pay more taxes." Meanwhile, Antwerp's diamantaires will welcome the predictability of the new system. AWDC CEO Ari Epstein shares his thoughts.

In my ten years working in the diamond industry I have seen and learned a great deal: the requisite peaks and valleys in diamond demand, sputtering economic growth in times of uncertainty and the impact this has on a luxury product such as diamonds.

The diamond industry serves as a sort of bellwether for the global economy. No other trade is as international; no other product is as sensitive to fluctuations in the global marketplace. The diamond trade rides the waves of the global economy. When economic growth slows in an important consumer country, the industry feels it all the way down to the diamond mines in Russia, Africa or Canada.

Certainty is crucial in an industry like ours: the greater the certainty, the more pleasant the job. We cannot control the global economy. What we can do, however, is to make sure we actually control those things we can control – such as the way we finance our business. The taxes we pay every year should also be predictable. Only in this way can we create a stable foundation in the unpredictable market in which we operate.

Antwerp has experienced political, economic and social stability for many years. These factors explain Antwerp’s success in the international diamond world. Now we are adding yet another advantage: fiscal stability.

We have been lobbying for several years for the introduction of a so-called Carat Tax – a system whereby diamond traders are taxed on the basis of a lump sum percentage of their turnover. This would bring the annually recurring discussions about the control and valuation of diamond traders’ stock to an end. And now it is a done deal. The Carat Tax will enter into force.

The European Commission has given the green light for the Carat Tax, meaning that Belgium will introduce an established system that specifies the gross margin of Antwerp diamond companies. (For more details about the technical implementation of the system, click here). This system has several advantages – in particular, predictability, such that diamantaires will always know what to expect.

Antwerp has always offered unparalleled knowledge and expertise, a critical mass of 1,700 companies ensuring competitive pricing, and a large number of sightholders, which guarantees a broad and diverse range of goods. When these advantages are combined with the new tax regime, the overall turnover of the Antwerp diamond industry will increase. This is because all indicators point to companies once again setting up shop in Antwerp.

Antwerp is the Promised Land for the international diamond industry. Now that we also have clearest, most certain and predictable taxation system in the industry, the difference between Antwerp and other trade centers will be even greater.

Furthermore, our decision, taken more than ten years ago, to opt for transparency made Antwerp the first and only diamond trade center to choose resolutely the straight and narrow path. The financial downturn has led banks to focus solely on nearly risk-free ventures and to dispose of their internationally oriented services. Anything that carries the slightest risk falls by the wayside … even if it can be monitored. In the short term, controls and international operations cost time and thus resources, such that a general derisking strategy is more attractive than actually investigating the risks for each client.

In the long term, this strategy involves more disadvantages than advantages. General derisking, which furthermore is diametrically opposed to FATF (Financial Action Task Force) guidelines, means that certain industries and sectors get pushed in the direction of cash or illicit financial transactions. Consequently, this strategy is untenable in the medium term. Yet financial institutions, just like the diamond industry, seek certainty. Here as well, the Carat Tax may be helpful.

The decision for predictable taxation according to the legally binding Belgian system, whereby profits reinforce capital reserves, ensures a healthy foundation for companies and will provide banks the confidence they have been seeking ever since the financial crisis. The fact that the government fully supports this system and contributes to administrative certainty will be music to the ears of bankers.

This is particularly the case when combined with the unique, draconic and external governmental controls – crucial for the banks – that are already in force, such as: the 100% physical controls conducted by the Diamond Office, but also anti-money laundering seminars and regulations that are provided and monitored in Antwerp, for which the government issues official certificates.

This demonstrates that the Antwerp diamond industry has excellent cooperation with the government. The Belgian government does more than simply impose regulations and implement controls to see whether the regulations are being respected. The government also enters into a constructive dialogue with the industry in order to improve the business environment in a sustainable manner.

Ten years ago, the Antwerp diamond industry took a great risk by being the first and only trading hub to opt resolutely for this controlled and transparent way of doing business. Now that the tide has turned, these efforts are bearing fruit. The international diamond industry has become more competitive in recent years, but as a result of the many measures taken, and the Carat Tax in particular, the continued prosperity of Antwerp in this survival of the fittest has become significantly more assured. At long last … transparency has become a competitive advantage!

A PDF explaining the Carat Tax and a PDF promotional poster are included in annex.