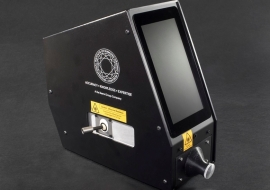 The International Institute of Diamond Grading & Research (IIDGR), part of the De Beers group, announced that it will unveil the latest addition to its suite of synthetic detection technology at the forthcoming Hong Kong Jewellery & Gem Fair between September 14 and 18. The new instrument, PhosView™, is a compact, self-contained screening device designed to allow parcels of polished stones to be quickly and accurately analyzed to determine if they contain potential High Pressure High Temperature (HPHT) synthetics.

During analysis, colorless and near-colorless stones in the 0.003 carat (one third of a point, or 0.9mm) to one carat size range are viewed on a screen while being subjected to UV light. Any phosphorescing stones are revealed and may be manually separated out for further analysis using built-in manipulator arms. The machine is designed to screen loose diamonds as well some jewelry pieces.

Jonathan Kendall, IIDGR President, said: “With rising concerns in the diamond industry around undisclosed HPHT synthetics, protecting trade confidence is critical. Harnessing the expertise in De Beers Technologies, we have developed the new PhosView™ instrument to provide HPHT screening capability – available at the highly competitive introductory price of $3,700 during the September Hong Kong Fair – so that it may be used by as many businesses across the industry as possible. We look forward to demonstrating PhosView™ to businesses within the diamond trade at the upcoming show.”

The PhosView™ instrument will be available to purchase from September. The introductory price of $3,700 will only be available for orders placed during the Hong Kong Jewellery & Gem Fair, after which the price will increase to $4,500, De Beers added.