India May Sell Off Diamond Mine Abandoned by Rio Tinto 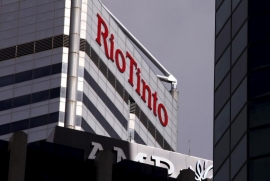 India will auction a diamond project that global miner Rio Tinto is abandoning, or allocate it to a state firm, the mines secretary said on Tuesday, adding that the government would move fast to take advantage of the Bunder deposit which is located about 500 km (300 miles) southeast of New Delhi. It was discovered by Rio Tinto in 2004, and is estimated to contain about 27.4 million carats of diamonds. Rio Tinto said last week it would pull out of the project, on which it has spent about $500 million, by the end of the year to conserve cash and cut costs.

Mines Secretary Balvinder Kumar told Reuters in an interview the withdrawal was a surprise as the company was close to getting a forest clearance for the mine from the environment ministry. Rio Tinto's decision came at a time when the government was seeking the help of the firm and its rivals, such as Anglo American, to explore for diamonds and gold to make India a major mineral producer. "It's a commercial decision taken by their headquarters in which we could have not done anything," said Kumar, who has been briefed by Rio Tinto India management on the exit. "Bunder is one of the best deposits in India and we would like to make sure that it is tapped."

Kumar said he would talk to parties interested in Bunder when Rio Tinto formally hands the project back to the state government of Madhya Pradesh, where it is located. He said Madhya Pradesh already had a lot of data on the mine that can be shared with potential bidders or any government company willing to develop it. Rio Tinto has said the company would work with the government on the future of Bunder and was "looking at options for a third-party investor to carry forward the development of the project".