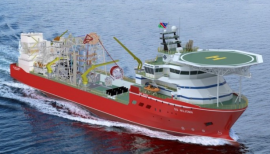 The final phase of the building of Debmarine's new diamond exploration and sampling vessel is now under way after its arrival in Cape Town last week. The SS Nujoma arrived in Cape Town on Saturday after a three-week maiden voyage from Norway, where the ship was built by Norwegian shipbuilder Kleven Verft over the last 15 months. The purpose-designed, 113-m long vessel will start operating in Namibia’s Atlantic 1 diamond mining license area in early 2017, Mining Weekly reported.

“The integration of the mission equipment into the vessel, is the final construction phase of the SS Nujoma project journey before the vessel sets sail for Namibian waters,” said De Beers Marine, which is managing the N$2.3-billion project on behalf of Debmarine. The sampling system and treatment plant, built in large modules in the Port of Cape Town, will now be lifted onto the vessel using a 750 t crane, said De Beers Marine project head Michael Curtis.

The new vessel, which is expected to have a 40-year lifespan, will join five other diamond mining vessels in the Atlantic 1 mining license area and will further expand the sampling capacity and future capability of Debmarine Namibia’s operations.