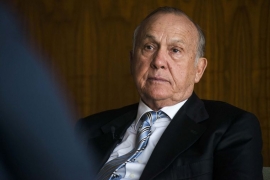 South Africa’s richest man, Christo Wiese, sees opportunities to consolidate diamond operations in the region after buying a stake in diamond miner Trans Hex Group Ltd. Wiese, 74, told Bloomberg that he has always been “fascinated’’ by diamonds and saw good value in them. “There are opportunities for consolidating diamond operations in southern Africa. Obviously we will look at growing the business as much as we can." Diamonds are “wonderful things, things of beauty and of everlasting value," Wiese said. “It’s just a very exciting business.”

Two companies backed by Wiese’s family bought a 47 percent stake in the gem producer and planned to form a group with 25 percent shareholder RECM & Calibre Ltd. While Wiese is best known for his retail successes including clothing chain Pepkor, which was sold to Steinhoff International Holdings NV for $5.7 billion in 2014, Trans Hex isn’t his first foray into diamond mining, tracing back to co-ownership of a South African alluvial diamond mine in the 1970s. He is worth $7.6 billion, according to Bloomberg Billionaires index.