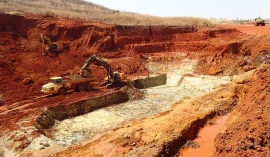 Stellar Diamonds plc, the London listed diamond development company focused on West Africa, has agreed a proposed transaction with Octea Mining Limited to combine Stellar’s Tongo kimberlite diamond project with Octea’s adjacent kimberlite diamond project, Tonguma, and to bring both assets into production under the same production infrastructure in Sierra Leone. The potential transaction, if completed, would be classified as a reverse takeover under the London AIM stock exchange's Rules for Companies and would require the publication of an admission document and also be subject to shareholder approval.

Accordingly, trading in the company’s shares on AIM will remain suspended until either an admission document is published or the company announces its or Octea’s withdrawal from the potential transaction. Trading in Stellar's shares has been suspended since Friday morning.

Stellar said that among the highlights of the deal were that a combined inferred diamond resource of 5 million carats would be brought into a single mining operation; there are diamond grades up to 290 carats per hundred tonne (cpht); an average diamond value of $193 and $270 per carat for Tonguma and Tongo, respectively; an exploration target of up to 8 million carats; and the opportunity presents enhanced production levels and operational margins, when compared with a stand-alone Tongo mining operation. In addition, there are no cash acquisition costs to Stellar which will fund and operate the enlarged mine development, and Stellar will preferentially recoup repayment of development capital prior to paying a royalty and net profit interest to Octea.

Stellar’s Chief Executive Karl Smithson commented: “The Proposed Transaction, if completed, will be transformational for Stellar and its shareholders. Once in production the combined diamond mining operations will be the second largest in West Africa with an estimated maximum output at full production of approximately 250,000 carats per year of high value diamonds. The high grade and high value nature of the kimberlites to be mined are compelling and the combination of operations should provide meaningful cost synergies that will enhance Stellar’s projected operational margins. Using the available infrastructure at Tongo and Tonguma, we expect diamond mining operations to commence within the first 12 months post completion of the Proposed Transaction.”

Octea’s General Manager, Christo Swanepoel, commented: “Stellar has long-standing expertise in Sierra Leone and the Tongo region in particular, which we believe will be of great benefit to the project. In addition, the enlarged project should significantly increase local skilled employment for many years to come which in turn will support the local economy as well as generate significant funds for the Sierra Leonean government.”