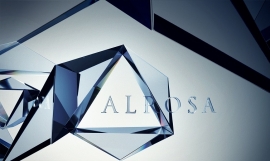 ALROSA will participate in the Second Eastern Economic Forum on September 2-3 as its official partner. The Eastern Economic Forum is held annually in Vladivostok in accordance with the Decree of President Vladimir Putin. The aim of the Forum is to promote the accelerated development of the economy of Eastern Russia and expand international cooperation in the Asia-Pacific region.

The ALROSA delegation, headed by the President Andrey Zharkov, will participate in the events of the Forum and represent a number of the company's investment project. ALROSA is also planning to sign an agreement with the Ministry for the Development of the Russian Far East for its largest investment project – the diamond mining plant in the Verkhne-Munskoe ore field.

The launch of the Eurasian Diamond Centre in the Vladivostok Free Port is also an important event for the company. It will bring together companies involved in the diamond industry: rough diamond producers and sellers, manufacturers of polished diamonds and jewelry, gemological laboratories, banks, insurance companies, specialized transport companies, and government agencies such as customs and state control bodies. ALROSA added that a unique 360° video film about its production facilities will be shown to guests at the company's exhibition stand.